The Epiphany has opened and while the sim may be jam packed it's definitely going to be worth you fighting your way to get your hands on what is literally amazing stuff from some of Second Life's best creators.

I've always been a Harley Quinn fan, from the original red and black jumpsuit and jester hat through to what was my favourite Harley Quinn from the Batman Arkham series of games. Ever since I watched the Suicide Squad trailer I've been enamored with the Margot Robbie version of Harley Quinn. So when I saw that Blueberry and Grixdale had teamed up to make their own interpretation of this outfit I made a noise that wasn't human with excitement. 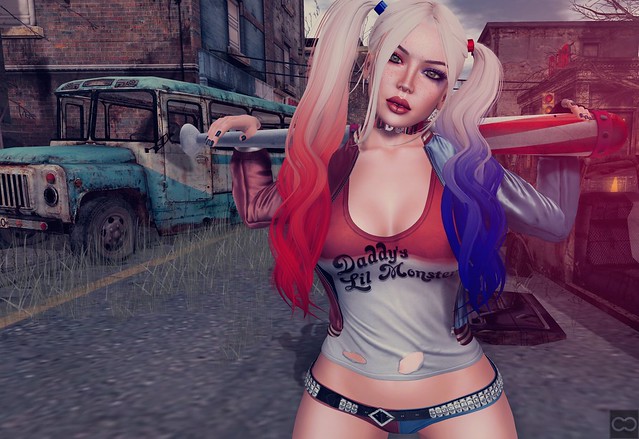 Go throw your lindens at the Madcap Gacha to get your hands on the outfit. It comes in various colours but of course the closest to the original is the 'Jester' colour. The jacket and pantie in this colour are rares so fingers crossed you get the pieces you want. It's only 50L a play too!

Little Bones is only making it easier for me to get all dressed up with their Harley Gacha. You can get collars, cuffs and lots of random colours as commons. If you want to get the Harley Quinn pack you'll need to be lucky enough to snag the rare. It's 75L a pull! Good luck!

Picture taken at Everwinter
at 03:52