Lootbox is a new event, it's only on it's second round, but it's definitely one worth visiting. It was originally part of The Fantasy Collective but it has proven to be so popular that it's branched off into it's very own event! How cool is that? It has some of Second Life's biggest creators and they've filled their gachas with goodies you are going to want so much. 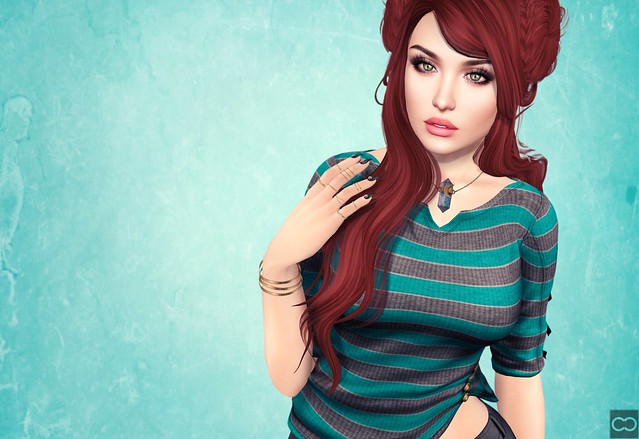 The Rings and Claws are both in the Bring Me The Thorns gacha by Ama. The Rose Claws you'll have to be lucky enough to snag the rare Lootbox to win but the Simplicity Rings are one of the commons. It's only 50L a pull so keep going until you snag that Lootbox.

The hair you can try and snag from the Apsen gacha by Doe. This colour can be found in the Reds pack which is a common but the two rare huds that come in the Lootbox have some extra special colours. It's just 75L a play!

Once you've finished your trip around Lootbox nip on over to Lost & Found to pick up the Simple Truth Bracelets, also from Ama. You can stack these bracelets or just wear the single version alone. They come with a hud too that has five metal colours and eleven different text sayings.

Lastly hop, skip and jump down to the Just Because main store because they have the Breanna Shirt as a new release for you. They have all the usual Just Because colours but you also get a bonus stripey version with each colour you buy. If you get the fatpack you'll even get 15 additional exclusive colours. It's made in fitmesh for all three Belleza bodies, both Slink bodies and the Maitreya Lara. This is another piece in their AnnieRose collection which means that Annie's RL daughter designed this piece and Annie brought it into SL for us!