I'm Not Ready To Let Go Of Autumn 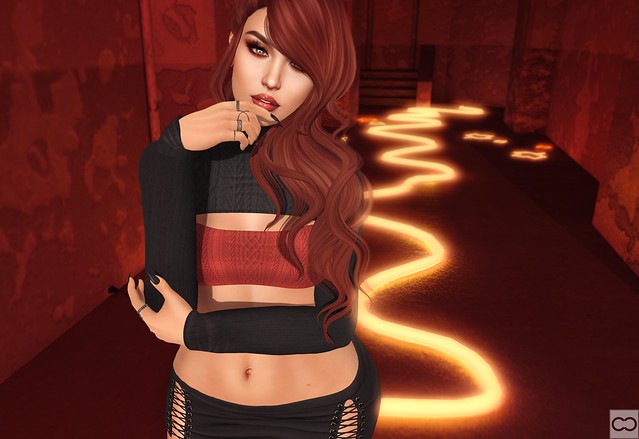 I don't want Autumn to end. It's starting to get Winter cold out there and I know some of the people I know have even hit snow. I still want it to be crisp and cool enough to wear scarves and hats but not feel that horrible cold to the bone feeling no matter how many layers I throw on. Why does Autumn feel like the shortest ever season?

Not exactly dressed for Autumn right now but the Flow cropped shirt and tube top set from LX Essentials down at 4Mesh is too cute not to wear. The fatpack allows you to change the shirt and tube top separtely so it's the most fun to play with but also comes in 16 single colours. It's made in fitmesh for Belleza Freya & Isis, both Slink bodies and the Maitreya Lara.

Again not really suited for running around outside in Autumn but hell if I'm flashing some skin I may as well go all out and team it with the Lala Mesh Mini Skirt from Rebel Hope which is also at 4Mesh. You'll find 10 colours for this piece and fitmesh for all three Belleza Bodies, both Slink bodies and the Maitreya Lara.

Cute in any season are the Sabrina Rings from Elise. Another 4Mesh release so make sure you take a full wallet. They're made for Vista Bento and Maitreya Bento hands and include a HUD with 4 metal colours. A nice touch is being able to change individual rings so you can mix metals if you want.

Hopefully your wallet still has a few lindens left for a trip of to Whimsical to get your hands on the Morgan hair from Doe. There are two versions of the hair in this gacha; V1 has a pony tail and V2 has a bun at the back. It's only 75L per play which is a bargain for hair because let's face it you're usually looking at 250L plus for a pack of hair so play until you get something you love and share the extras with your friends or even better keep them for Christmas gifts!